Gans Biography: Contributions to the History of Herpetology 2012

Society for the Study of Amphibians and Reptiles – Issued to Commemorate the 7th World Congress of Herpetology, Vancouver 2012 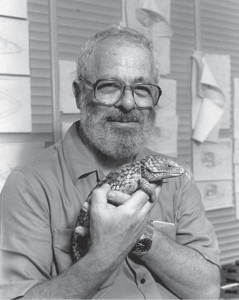 Gans, the preeminent scholar on reptilian biology and biomechanics of his generation, was born in Hamburg, Germany, on 7 September 1923. With World War II looming, his family immigrated to the United States as Jewish refugees in1939 and settled in New York City where he finished high school. His interest in exploration and animals began as a boy from reading fictional adventure books by the German writer, Karl May, about traveling to exotic places to collect animals. In his late teens, his family lived in Upper Manhattan near the George Washington Bridge and on Sundays he walked across the bridge to collect amphibians and reptiles in the wet undeveloped areas of the New Jersey Palisades along the Hudson River. Despite Gans’s interest in animals, his father would only finance his higher education if he chose a “practical” profession, so he studied mechanical engineering. After graduation (B.Mech.Eng., New York University, 1944), he joined the U.S. Army Corps of Engineers. He served in the Pacific Theater, first in the Philippines and then in Japan where he conducted some field studies.

On his discharge from the army, Babcock and Wilcox Co.in New York City hired Gans as a mechanical engineer (1947–1955). He completed a graduate degree in the subject through home study (M.S., Columbia University, 1950), the year his father died. His herpetological publications began in 1945 and included papers from his time in Japan—notes on the breeding season of rhacophorid frogs, adaptations for egg-eating in ratsnakes, and his first major publication, “A Bibliography of the Herpetology of Japan” (1949). He continued his career as an engineer, but during 1953–1954 Gans took leave from his job and, with the aid of a fellowship, went to South America for fieldwork in Brazil and Bolivia. It was during this trip that he was introduced to the animals that were to become one of his favorite subjects for systematic and functional morphology studies, the fossorial squamates called amphisbaenians. Gans returned to his engineering position in 1954, but by then his career path had been irrevocably changed. At the age of 32, he became a doctoral student in biology at Harvard University with the vertebrate morphologist and paleontologist, Alfred Sherwood Romer, but later transferred to Ernest E. Williams, an evolutionary biologist.

By 1957, Gans had already completed his dissertation, a pioneering study of the African egg-eating snakes (Dasypeltis) that combined his interests in engineering and evolution. Earlier (1952), based on his private research, he had described the morphological and biomechanical adaptations that allow these nearly toothless snakes to eat large eggs, crack the shells within the esophagus, squeeze out the liquid contents, and regurgitate the shell as a cigar-shaped mass. At Harvard, his studies on Dasypeltis showed that their color patterns varied geographically and in parallel with those of several small vipers. He reported (1961) that these snakes all display similar C-shaped coiling and scale-stridulating warning reactions when disturbed. He recognized that the color pattern and behavioral convergence of these snakes represented an example of Batesian mimicry and then extended this idea to develop the new concept of “empathic learning” to explain how mimicry could evolve even when the model is lethal (1965). This work, integrating Gans’s interests in systematics, morphology, biomechanics, and evolution, became the pattern for his research career.

After postdoctoral work at the University of Florida, in 1958 Gans joined the biology faculty at the University of Buffalo in western New York State. His most extensive publication during this period was a book-length monograph, “A Taxonomic Revision of the African Snake Genus Dasypeltis” (1959). He became chairman of the department in 1970, but the next year he moved to the University of Michigan as chairman of the zoology department and continued as professor at Michigan for the rest of his research career. Gans was an active field biologist over nearly five decades and amassed a personal collection of some 10,000 specimens from many parts of the world (see Note 1). He retired in 1997 and moved to Austin (Texas) where he had an adjunct position at The University of Texas. In January 2001, he suffered a stroke that progressively curtailed his scholarly work. He died in Austin on 30 November 2009.

Gans’s research program covered an exceptionally broad range including functional morphology (mainly of vertebrates); systematics of reptiles (especially of amphisbaenians, on which he authored 94 titles, 1957–2008, of which 10 were major works); the evolution of early vertebrates; and adaptations of limbless and burrowing tetrapods (mainly caecilians, amphisbaenians, and uropeltid snakes). His pioneering studies on the origin of vertebrates, in collaboration with R. Glenn Northcutt, a neurobiologist and colleague at Michigan, focused on the invention of the head (and thus the neck),which was made possible by the evolution of a new kind of embryonic cell—neural crest.

Gans took an engineer’s approach to studying and experimenting with functional problems such as locomotion, burrowing, feeding (especially chewing), respiration, sound production, and hearing, all studied within an evolutionary context. He used many technical innovations in this work including electromyography, cinematography, and cinefluorography. His classic studies on breathing in frogs, conducted primarily with the Dutch functional morphologist, H. J. deJongh, discovered the sequence of events—how and when frogs fill their buccal cavity with fresh air, empty the lungs, close the nostrils, and pump the buccal contents into the lungs—and demonstrated that relatively pure air was pumped into the lungs. Gans also made important studies on hearing in caecilians, amphisbaenians, and tuatara together with Ernest G. Wever (see Note 2), a physiological psychologist at Princeton University.

Gans served as president of several biological societies, among them the American Society of Ichthyologists and Herpetologists and Society for the Study of Amphibians and Reptiles. He served as editor of the Journal of Morphology for 25 years. His major editorial achievement, however, was the 22-volume series, “Biology of the Reptilia” (1969–2010), which he conceived, edited, and partly wrote. This compendium, covering the behavior, development, ecology, neurology, physiology, and especially the morphology of reptiles, is one of the monuments of modern herpetological and biological science. The previous comprehensive review of reptilian biology was authored a century earlier by the Dutch anatomist, C. K. Hoffmann, in H.G. Bronn’s classic series, “Klassen und Ordnungen des Thier-Reichs” (reptiles in 3 volumes, [1879]–1890).

Besides the books noted earlier, Gans’s major works include a photographic atlas of shark anatomy (1964, with Thomas S. Parsons, an American anatomist) and a practical manual on electromyography (1986, with an American biomedical engineer, Gerald E. Loeb). His highly popular pocket-sized book, “Reptiles of the World” (1975; translations into five languages including Chinese), was far more than a color picture book because the long captions contained insightful and sometimes still-unresolved aspects of reptilian biology. Gans’s classic textbook, “Biomechanics: An Approach to Vertebrate Morphology” (1974; reprinted 1980), summarized his early research and has become a standard resource for the field of functional morphology. All told, Gans authored more than 700 titles, most of them on amphibians and reptiles. These cover a spectrum of topics unmatched by any other herpetologist of his era.

Note 2: Ernest Glen Wever (1902–1991), generally known as Glen Wever, received his doctorate at Harvard University (Ph.D. 1926) and was a pioneer in the study of hearing. He used cochlear potentials to investigate the biomechanical function of the outer, middle, and inner ears, and wrote classic texts on the subject including “Theory of Hearing” (1949) and “Physiological Acoustics” (1954). Later in his career, he studied the evolutionary biology of hearing, which led to his major comparative studies in herpetology, “The Reptile Ear” (1978) and “The Amphibian Ear” (1985).