The Gans Collections and Charitable Fund, Inc consists of a Board of Trustees and a Scientific Advisory Board.

Our logo is a photo of the nameplate carved by Ray Huey. It consists of balsa wood letters on Masonite board. Ray made it in the spring of 1968 or 1969 when he was getting an MA degree in Zoology at UT Austin. 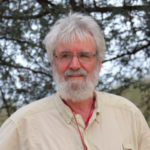 Ray and Carl had not met, but Ray had been fascinated by Carl’s egg-eating snake work. Those remarkable studies helped convince him to go into functional biology rather than medicine. When Ray learned that a fellow grad student, Billy Martin, was about to head up to Michigan to work with Carl on a frog project, he decided to carve the nameplate and asked Billy to deliver it to Carl. Carl then sent Ray a thank-you letter, which Ray remembers well.

“He thanked me and then said that this nameplate warned visitors of his ‘true ophidian nature.’”

A few years later Carl and Ray finally met, and become friends, colleagues, and co-editors of one volume of Biology of the Reptilia.