Reptiles of the World: American Alligator 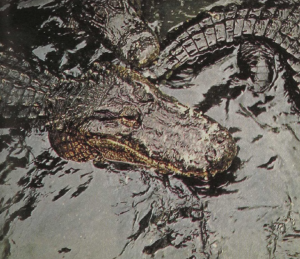 The American Alligator and its close relative, the Chinese Alligator, found only in the Yangtze Valley, are remnants of one of two major groups of crocodilians. They are certainly the only crocodilians now confined entirely to temperate regions. American Alligators were once common in the estuaries and river courses of the coastal regions from North Carolina to Texas. Recently their range has been reduced, and they are now protected over its entire area.

As with other crocodilians, the juvenile period is the most critical time for the alligator. After burying some 50 or more eggs in a mixture of rotting vegetation, the female stays close and defends the general nesting area until the young hatch.

These animals are known to reach lengths of 18 to 19 feet, although records of such size are rare.