Reptiles of the World: Bull Snake 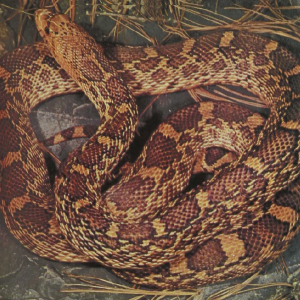 The Bull Snakes range throughout most of the United States, These large animals often exceed 7 feet in length and feed almost entirely on small mammals of which they may be one of the more important controlling factors. The Bull Snakes climb and burrow and have been observed to dig rodents out of their tunnels by shifting the soil from the hole with loops of their body.

Their name derives from their pugnacious habit: when attacked or disturbed they do not immediately retreat but strike at the intruder by vibrating their tail, simultaneously exhaling sharply. The air stream inflates and vibrates a little fold of soft tissue in the front of the mouth, producing a loud hiss. (Contrary to the widely-held belief, relatively few snakes hiss.)