Reptiles of the World: Common Anole 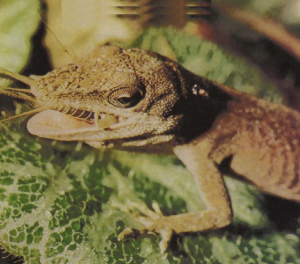 The anoles are small to medium-sized (7 inches maximum), mainly arboreal lizards that have become immensely successful. More than 300 species range from the southeastern United States through the humid tropics into Brazil. Once this anole was the only United States species, but some half-dozen other Latin American forms have recently been introduced into southern Florida.

Where several species occur in the same place, one is apt to occupy the ground and low grasses, while another may occupy the trunks or canopy of palms and trees. Even males and females occupy different locations. The males display to each other by bobbing the body up and down and showing a brightly colored scarlet or yellow throat fan. Anoles used to be sold as pets under the name of “American chameleons.”

Intensive study of these common and easily observed animals is teaching herpetologists a great deal about the way in which reptiles invade new areas and how new species arise.