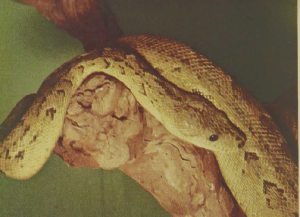 Eleven species of ground boas range through the large islands of the Antilles and into South America, various related species occurring on the mainland of South America. All are beautifully marked in varying shades of brown and yellow and have a stout body, gradually tapering to a thin neck and tail. The head is elongate and noticeably triangular. The Cuban species is barely 3 feet long. These snakes are harmless to man and feed mainly on small reptiles and mammals, which they kill by constriction.

Some species of ground boa defend themselves by a mechanism which has been described but is not yet understood; when disturbed, the snake can apparently rupture a blood vessel near its tear gland; the blood flushes down the tear duct, passing underneath the fused transparent eyelids, and then out of the mouth. Human observers note that the eye turns bright red, and the blood then drips from the mouth. Nothing is known either about the chemistry of this apparently defensive secretion or about the predator toward whom it is directed.