Reptiles of the World: Hawksbill Turtle 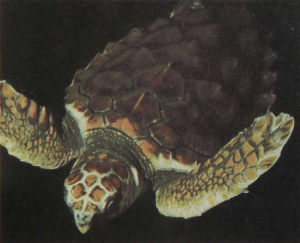 Like all sea turtles the Hawksbill propels itself with its front flippers. These act as a pair of hydrofoils and exert forward forces both during the upstroke and the downstroke, the hind feet being used primarily for steering. Like all other turtles, the Hawksbill uses the hind feet to excavate the nest.

This species occurs in several races across much of the Atlantic and Pacific Oceans.