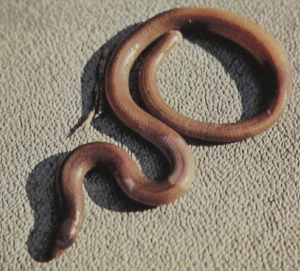 Some tropical parts of the world are inhabited by isolated animals, the affinities of which leave us thoroughly confused. Examples are the three species of the genus Dibamus from New Guinea and a few Indo- Malaysian islands, and this rare snake lizard from Mexico of which only some dozen specimens have thus far been found. All of these lizards have a skull reduced for burrowing, are almost blind, and lack limbs. The skin is covered with scales, like those of snakes. Few people have seen either Snake Lizard alive; some experts believe them to be most closely related to the skinks while others say that they form a missing link “between lizards and snakes.” Recent studies on their brains suggest that the Mexican animals are indeed most closely related to those of New Guinea. Such a curious situation certainly deserves a bit more investigation.