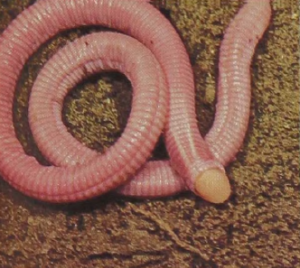 This is a member of one of the more specialized amphisbaenian lines. The facial portion of the snout has become spade-shaped with the face covered by some soft tissues then again enfolded in a heavy layer of keratin. This arrangement represents high modification for tunneling. The snout is first rammed into the tunnel’s end, up to the level of the eye. The Monopeltis then rotates the head upward compressing the soil into the roof of the tunnel. The need to exert pressure on the wall of the tunnel has not only resulted in the stiffening of the shield but has also forced the jaws to be reduced. The number of teeth is less than in the round-headed White Amphisbaena and the eyes have become smaller and have been displaced to the sides. 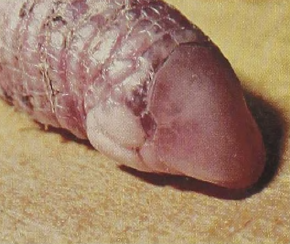 Members of this group grow up to 2 feet in length and lay their eggs mostly in the large termite hills found on the high plains of southern Africa. Other species of the genus range from the Cameroons to South Africa and to Tanzania. This South African species ranges from the Cape Province north to the southern borders of Zambia and into Mozambique and Angola.