Reptiles of the World: Tuatara 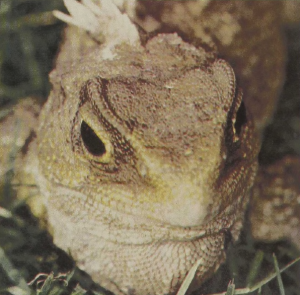 These unusual animals resemble 2-foot-long lizards. Actually they are remnants of a group of reptiles that was once thought to have become extinct 200 million years ago. Since their rediscovery 140 years ago, they have been studied intensively, but new curiosities are regularly uncovered. Tuataras differ from lizards, among other ways, by having two rather than one bony arcade framing the back of the skull. Curiously, their preferred temperature is about 13°C (56°F)—more than 10° less than that preferred by any other reptile of the Recent epoch.

Their hatchlings resemble turtles, crocodilians, and birds in havinga caruncle, or keratinous bump, on the nose with which they break the eggshell from the inside. Eight to 14 eggs laid at a time must be incubated for 13 to 14 months; the animals are known to live more than 77 years, much longer than recorded for any lizard or snake^

The species is restricted to a few rocky islands off the coast of New Zealand where the remnant population is strictly protected.