Reptiles of the World: Vine Snake 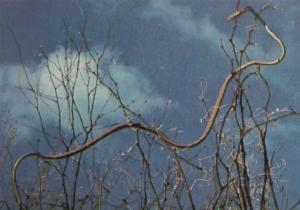 The tropical forests of South America are the home of this Green Vine Snake, in form very similar to some unrelated species of southern Asia. All Vine Snakes tend to have pointed heads and slender bodies and may reach a length of about 4 feet. They are rear-fanged and their venom specifically paralyzes small lizards, such as the anole. When hunting or otherwise excited these snakes project the anterior tip of the tongue but, rather than flicking it as other snakes do when sampling the environment, they keep it projecting while moving along.

In passing from branch to branch the Vine Snakes move in a jerky fashion, and one can see that they increase their wavy progression whenever the wind rustles the adjoining leaves. In this way they are apparently camouflaged in behavior as well as in shape and color.