Reptiles of the World: White Amphisbaena 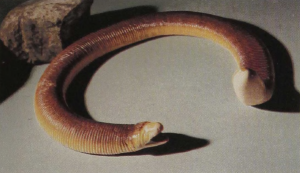 This is probably the largest of all the amphisbaenians. Specimens grow to more than 2 feet in length and almost an inch and a half in diameter. This formidable predator lives underground in a variety of forest and plains localities across the South American continent east of the Andes, from Panama to Paraguay.

It moves by sliding its loose, sleeve-like skin forward then backward over the body: portions of the skin are pressed to the ground and the body is then pulled forward from these. Its jaws are relatively large and upper and lower teeth interlock, letting the animal crush the shells of beetles and the bones of lizards and small mammals. Like all other species of its order, the White Amphisbaena tracks its prey by sound: the sensitive zone has shifted from the back of the head to the side of the lower jaw, which is connected by a cartilaginous amplifying rod directly to the middle ear.

There are many reports on the association of this species with the nests of leaf-cutting ants, but we know next to nothing of how they manage to avoid the soldiers defending these.