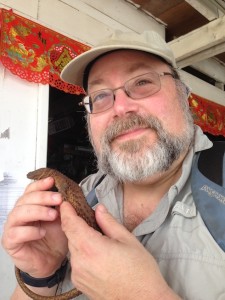 Born in New York City in 1961, Aaron M. Bauer received a B.S. in Zoology and B.A. in History from Michigan State University in 1982 and a Ph.D. in Zoology from the University of California, Berkeley in 1986.

He held a postdoctoral fellowship at the University of Calgary and moved to Villanova University in 1988, where he is Professor of Biology and holds the Gerald M. Lemole Endowed Chair in Integrative Biology and Director of the Graduate Program in Biology.

He has authored over 585 journal articles, book chapters, books, and other publications, chiefly on the systematics, evolutionary morphology, paleontology, ecology, and biogeography of reptiles, especially lizards and has described approximately 150 new species of reptiles.

He maintains an active field research program in Namibia, South Africa, Angola, Australia, New Caledonia, India, Malaysia and other parts of the world. He is also interested in and publishes on the history and bibliography of herpetology and museology.

He currently serves as an editor, associate editor, or editorial board member of 12 national and international journals and edits the book series SSAR Facsimile Reprints in Herpetology. He has museum research appointments at the Museum of Comparative Zoology at Harvard University, the United States National Museum, The California Academy of Sciences, and the Academy of Natural Sciences of Drexel University in Philadelphia, and holds the position of Extraordinary Professor of Zoology at the University of Stellenbosch, South Africa. He has served as President of the Herpetologists’ League, Chairman of the Herpetological Association of Africa, and Secretary General of the World Congress of Herpetology, and is currently President-Elect of the Society for the Study of Amphibians and Reptiles. He lives with his wife Monica in Bucks County, Pennsylvania.